New Research Confirms Cloud Seeding Can Produce Snowfall
Scientists say they used new measuring methods to confirm that cloud seeding can produce snowfall under the right conditions.
Researchers used radar and other instruments to measure snowfall levels during experiments carried out in 2017 in the American state of Idaho.
The experiments involved scientists from several American universities, as well as the U.S. National Center for Atmospheric Research, or NCAR. A study reporting the results was recently published in Proceedings of the National Academy of Sciences.
Cloud seeding has been tested in parts of the United States since the 1940s. It involves injecting various substances into clouds to produce precipitation — rain, snow or ice that falls to the ground. The process can cause ice to form and build up inside the clouds until it falls.
Some western U.S. states — including Idaho and Colorado — have increased cloud seeding in recent years to help meet a growing water demand. Until now, however, it has been difficult for scientists to measure the effectiveness of the process.
Researchers have mainly used instruments to compare the amount of precipitation from seeded clouds to similar clouds that were not seeded. But such studies have brought mixed results. This is partly because many elements influence natural precipitation, which makes it hard to na﻿﻿rrow down exact cause and effect results. 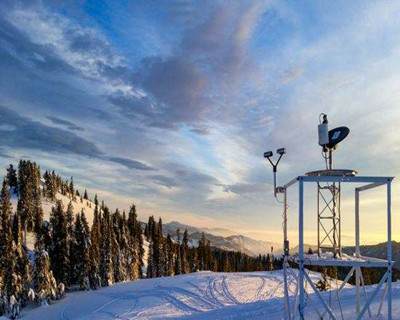 The research operation over western Idaho was called SNOWIE. It involved shooting small amounts of a chemical compound called silver iodide from an airplane into clouds. The chemical can cause water in the clouds to freeze into ice and then fall as snow.
In the new experiments, the scientists used radar equipment together with precipitation measuring instruments to collect data. The use of airborne and ground-based radars permitted the team "to observe the entire process and compare the side-by-side seeded and unseeded areas," the NCAR said in a statement.
In at least three cases, "the seeding measurably boosted the snowfall across the targeted watershed," the statement said. In some areas, the cloud seeding created new snowfall where no natural snow existed. One cloud seeding flight resulted in precipitation that produced snowfall for about 67 minutes.
The researchers estimated the three cases described in the study produced a combined precipitation total that could fill about 285 Olympic-sized swimming pools.
The researchers also used computer modeling to study precipitation measurements during simulated weather activity. The scientists say they hope to use the real results from the new experiments to improve future computer modeling predictions.
Sarah Tessendorf is a scientist at NCAR. She helped lead the experiments. She called the results a "revelation" to helping understand the effectiveness of cloud seeding technology.
But Tessendorf noted that the experiments also demonstrated that successful cloud seeding operations are dependent on certain conditions. There must be existing clouds to seed. The results are also dependent on local atmospheric conditions, such as temperature and wind.
Tessendorf said additional research would be required to study the long-term costs of major cloud seeding operations. "The seeding produces ice and that ice can form snow, but is it enough additional snow to make it cost-effective?" she asked.
While future experiments will seek to address those bigger questions, "we still have plenty of work to do to get there," she added.
I'm Bryan Lynn.